How to use WhatsApp Status?

WhatsApp Status is like Snapchat or Instagram Stories. WhatsApp is one of the most popular messaging apps with billions of users across the globe. The app has recently announced a new feature called WhatsApp Status. It is similar to the main feature in Snapchat, and Instagram’s Stories mode.

What is WhatsApp Status?

WhatsApp’s new status feature is a major upgrade to the original Status idea in the app. For some time in 2009 when it launched, you could have a status in WhatsApp only. There was no feature of messaging. You could just use ‘Available’ or ‘at the movies’ etc. As our smartphones are multimedia hubs now, it is essential that Statuses are now picture based. So WhatsApp has started rolling out this new feature. If you have not got it so far, it is time to benefit from this interesting and useful feature.

Read Also: How to Avoid WhatsApp Viruses and Scams?

On iPhone, the bottom row of options has altered. The far left tab is now ‘Status’ as an alternative to ‘Favourites’ and the center icon is ‘Camera’ in place of ‘Contacts’ now. The Camera button enables you to send a photo or video to a contact quicker, it’s not the new feature. To take and send a status, tap on Status in the lower left side of the app. This screen is the site where all your contacts' Statuses will be displayed. Each fades after 24 hours. First tap the + icon in the top right of the screen. It is possible to take a photo with a tap, or hold to take a video. 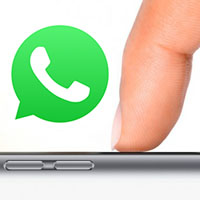