How to switch from Windows to Mac

If you are a long term user of Windows and now seeking to switch to Mac, using apps that you are comfortable with on PC is the best way to go. However, there are tons of other software that can do the job for you as well.

Office 365 subscription might appear to be the best choice for the existing users of Microsoft's Office suite of tools. This is for the reason that the apps offer nearly same functionality to the Windows versions. There are numerous users who want to make use the suite often may not want to let go of it, but others who are interested in a better choice can explore better options.

Mac by Apple itself is the first alternative itself: iWork. The main areas of office are covered by Apple's own app collection. It is used for, with Pages, Numbers and Keynote standing in for Word, Excel, and Powerpoint respectively.

Pages makes a great word processor that regular Word users can understand fast and can start working within instantly. Pages shows off its real worth once a piece is crafted, incorporating the text into scores of fantastic templates that makes an article/letter extraordinary.

A number of people are sick of working in spreadsheets so Numbers can make a far better option in that respect. The selection of templates are cool and simple, making them far less scary for beginners. In the same way, the overall interface makes starting from even the basic pages simpler than most would suppose.

Powerpoint presentation is the usual program that offers poorly produced works with many transitions and not much when it comes to visual appeal. On the other hand, Keynote, helps users create pleasing and more professional presentations.

If you would rather have something that looks like Microsoft's suite more with regard to the  appearance, another way to go could be by means of OpenOffice and LibreOffice. There is slight difference between the two releases. Both are same as far as what they offer you including tools for word processing, spreadsheets, and databases. Though the OpenDocument Format is better, they have no problem while opening Office files.

These 2 are less of a recommendation considering their ability to be used on the Mac. They are available to download for Mac, Windows, and for Linux, offer similar working environment on different platforms. Unlike Office, OpenOffice and LibreOffice are free tools, which his another plus.

We can consider Adobe Creative Cloud the Microsoft Office for art, design, as well as video. Similar to Office, Adobe makes its suite of apps accessible for the Mac. It means there is nothing to worry for creative individuals when making the switch.

Photographers can make the most of the Photos app to make changes to their photographs, with basic cropping of shots and automated adjustments for those seeking to do improvements to shots in a fast way. In the same way, those with more experience, Photos can dial up the number of potential options significantly, offering much more flexibility in getting the just the right image.

Photos is a great cataloging tool for images as well, offering collections of wonderful photos in shareable Memories, People for facial recognition of subjects as well as Places to show locations of where images are taken. iPhones and iPads users can see their whole image collection across several devices in the app as well, by iCloud Photo Library, with edits synchronizing across devices and effortless sharing of image groups on social media.

From Photoshop to Pixelmator

For design or editing work, Pixelmator makes one of the most popular replacements for Photoshop. The interface is great, making it a perfect example of what developers on the platform can do. It is an advert of the mac itself. If you need simple edits to an image it can handle perfectly with a simple interface. On the other hand, those who want to do advanced work can make use of the advanced features of Pixelmator.

The other option include the GNU Image Manipulation Project (GIMP). It is a useful image editing tool that works on both Mac and PC. The low cost does affect its functionality, since unlike the paid apps, it suffers from having a steep learning curve which makes it challenging for new users. The GIMPshop project may help as it redesigns the interface of GIMP to make it more accessible to Photoshop users, repositioning features and settings to where they would be in Adobe's software, making it handy to pick up.

From Adobe Premiere to iMovie

It is Adobe Premiere, which is the king on the PC for the purpose of video editing. After Effects, as part of the Creative Cloud, also aids in the process.  Adobe's grasp for editing extends to Mac as well. While there are other options out there, this software is most popular as well as most effective.

You might have heard of iMovie already which is a basic video editor that is preinstalled and free. Unlike the Windows Movie Maker numerous PC users will have played around with, it is a polished product which is very simple which is still powerful enough to make great videos.

If you wish to compile a video of your holiday or something like that, it is as simple as importing a few clips, organizing them and adding some special effects or filters. There are various soundtracks and title sequences as well which you can add to a project.

If you have an iOS device, you can make the most of making edits on the iOS version of the app, prior to  transferring the video to the Mac to improve it further. Though iMovie covers most standard switcher's requirements, if you are a professional you may wish to consider paying for Final Cut Pro X. While iMovie is simple and can be used by anyone, Final Cut Pro X, on the other hand, focuses on providing a wide array of editing options. It gives you additional options to alter the audio, add transitions, and to change the image. Final Cut Pro X has range of advanced features such as adds in multi-camera editing, multi-channel audio, support for industry standard formats (XAVC, AVCHD, and Redcode RAW) and more. It helps you manage media in a better way, automatic analysis of source material which is carried out in the background, range-based keywords for locating clips, and easy access to items in the user's Photos and iTunes libraries. You can make use of Final Cut Pro X to create polished content on a par with Premiere, making it a superb option for those of you who need to work on YouTube videos or bigger projects. In addition, the $299.99 price also makes it great for some video editors who want to quit Adobe's subscription.

Apple has announced a new Pro Apps Bundle for Education which is meant for students and educators in particular. It packs in Compressor 4, Final Cut Pro X, Logic Pro X, Motion 5 as well as MainStage 3 for just $199.99. The most essential app categories have their Mac peers, but there are some rare instances where an alternative is not there. Or where you don’t want to invest once more for a thing you have the license for in Windows already. In case if you don’t want to give up the Windows version by any means, there are some ways.

Boot Camp enables you to install Windows onto a Mac. You can have a separate partition with Windows running in a short while following the instructions of the Boot Camp assistant - as long as you have the Windows installation media and a spare license. Though it is free this option means that users have to successfully exit macOS to get into Windows, and vice versa.

Parallels Desktop is another option that is paid which can help Windows to run on a Mac. However, it is done differently. In this case, Windows runs on top of macOS in a window, allowing for software running within Windows to be used together Mac apps. But the bad thing is that it is priced $80 to do this, on top of a Windows license. If the PC will be available to use, you should consider connecting to it from the Mac remotely. Chrome Remote Desktop is comparatively easy to set up, and allows for remote control of a Windows desktop from in a window on the Mac. Besides, other solutions are also there like LogMeIn and VNC. However, as it is free and simple, Chrome Remote Desktop may be the best option in most instances.

I am sure this detailed guide will help you make the switch from Windows to Mac smoothly. You don’t have to fear the transition anymore as following these simple instructions will smoothen your way and put an end to all your confusions. Good Luck! 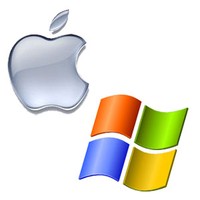